In 2014, I went on a trip to Israel.  It was a wonderful experience.  One of the souvenirs I purchased was a ram’s horn, a shofar.  Actually, I bought two of them.  One of them would be used to demonstrate what they sound like, and the other one, I would do some carving.

I decided to carve into this ram’s horn, the 7 Trumpets of Revelation.  You can find the seven angels who blow the seven trumpets in Revelation 8, 9 & 11.  I have the title carved in large letters on one side, and an angel blowing the trumpet with the seven judgments carved on the other side.

3rd Trumpet – A great star fell on a third of the rivers, turning them bitter

5th Trumpet – From a pit came smoke filled with locust, torturing man with their stingers

7th Trumpet – The heavens open with thunder, revealing God’s Temple and the Ark of the Covenant

I started out using an x-acto knife, but the blades kept braking.  I finally went to a Dremel tool, which sped the carving up greatly.  The shofar has a translucent quality, so I put a string of lights inside the horn which gives it a beautiful glow.  This project took me about eight months to carve.  I finished it in April 2019. 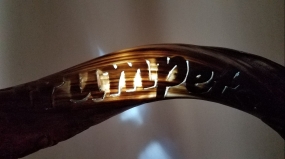